Transplanted To The South

I’ve mentioned that I had a foster dog named Patch in a previous post.  I have been trying to find him a home for the better part of a month now, as well as rehabilitate him because he gets aggressive with food.

Other than the food aggression, he’s been a very loving, and caring dog.  He would sit on my lap, he would nudge me when doing homework to play.  He was always by my side.

Unfortunately, last night, when Alex was feeding him, he attacked Alex, ripping open his hand.

With the bite gushing blood, we decide that we need to go to the ER.  We put Patch in his crate, and rushed to the ER.  They wrapped up his hand, informed us that you can’t stitch dog bites (They can become pockets of puss) and we waited close to three hours to be seen.

During this three hours, we were socializing with other ER patrons, making jokes, and trying to keep the mood light.

After the first two hours of waiting, Alex told me to go home and wait for him to call me to pick him up so I could let the dogs out.

So I took Luna, Sahara and Patch outside to do their business.  Lo and behold, Patch is being overly affectionate.  He doesn’t leave my side outside, he nudges my hand to pet him, and even rests his head on my shoulder when I knelt down like he was hugging me.

It broke me a little bit, not going to lie.  I hugged him and cried and told him he was a good boy and that heaven was just a big farm with unlimited food and lots of squirrels to chase.  He wagged his tail when I told him this, and I choose to believe he understood what I was saying.

I went back to the hospital to see Alex still in the waiting room.  He was surprised to see me back at the hospital, but when I told him that whenever I look at Patch, I start crying, he understood.  So we continued to make jokes.

He gets called back, and they put him on a hospital bed in the hallway that’s far too small for him. 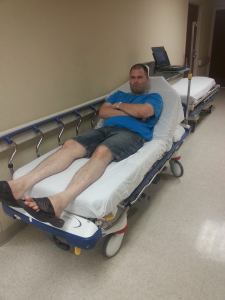 He’s just too big for most beds

We decided to avoid the topic of Alex’s hand gushing insane amounts of blood and talk about Alex’s need for Kanel Bullar, a Swedish cinnamon roll that I make whenever my Swedish sister in law visits us from Central Louisiana.  They’ve turned into one of Alex’s favorite foods and I rarely make them because they’re incredibly time consuming and we usually end up eating all two dozen of them in one sitting.

I teased Alex that if we ever divorced, he would have to convince his second wife to get the recipe from my cold, hateful fingers.

Alex responded with a snort, “Oh no, we’re ending on good terms so you’ll cook me Kanel Bullars for the rest of my life.  I’ll make you think the divorce was your idea so you’ll feel eternally guilty for it and make sure that you’re making up for it for the rest of your life via kanel bullar.”

I put my hands on my hips, “Oh, so you’ve thought about divorcing me?”

He laughs, “Every time you leave a mess in the kitchen.”

To which he kisses my hand and we laugh.  We always make jokes like this in times of turmoil.

Oh crap, this is every morning

Shortly after, the nurse informs us that he has contacted Animal Control and I had to talk to the woman about the entire situation.  I told her exactly what happened, we found out that we have to have him quarantined for ten days, then after that I can choose to surrender him, to which he will be humanely euthanized, or I can take him home and try to find him a home.

While I wish I could take him home, let him run in my yard, feed him lots of treats, and hold him close for the rest of his life, he’s not my dog.

He was never my dog.

He’s nothing more than a scraggly stray that I tried to help that I can’t afford to keep anymore.

And it’s killing me.

Alex had his wound cleaned and we were sent home.  We ate a bunch of cake to make ourselves feel better after being at the hospital for nearly five hours, while Patch lays curled up on the floor, next to my feet.

I slept separately from Alex that night because I wanted to cuddle Patch one last time, but Patch decided to sleep on the floor next to me, while I pet him while falling asleep.

I woke up to all three dogs standing over me, Luna licking my face and Alex crawling in next to me, giving me a hearty squeeze.

I made us a big breakfast, making a full package of bacon to divvy out to the dogs.

My stomach was uneasy, as we waited for Animal Control to come to our house.  About an hour before Animal Control showed up, Patch went to Alex and licked his face.  The first time he had licked either of us.  Even Alex was shocked at the display of affection.

When the woman from Animal Control showed up, Patch had his tail wagging and seemed excited.  He happily let her put the leash on him and ran out the door to the van.  He seemed almost happy to go.

I choked back a sob, and watched him leave.  He seemed happy to go.

Maybe he knows that it’s for the best as well.  I think that heaven will be a better place for him.

Luna has been sulking in her kennel ever since patch left.  I think she knows that he’s not coming back.

Poor Luna. Her buddy is gone

For anyone in the Louisiana area, Patch is being quarantined for the next ten days at the Bossier City Animal Control.  If you think you could rehabilitate him and get hi the care he needs, I think you can adopt him with my permission.  If not, I completely understand.  There’s nothing more I can do for him.

Have you ever had to make a decision that broke your heart?  Have you ever been in a situation where it ended far differently than you anticipated?  Let me know in the comments.

"I go to the free weights and attempt to build muscle." (Rolls a 1)

Tales of a surviver of abuse and poverty.

Stop Me If I Told You This...
Something to be Determined

...More Than Sweet Potatoes
Transplanted To The South

Culture Shock for a Minnesotan in Louisiana

Personal blog of a person.

I’m not a proper princess

I'm just a hack who likes to eat.

Observations from the trenches....