Transplanted To The South

One evening, Alex and I were having a very normal strange discussion.

Alex: How do I know you’re not working and actually finding men to meet? (He says this very sarcastically, as if I’d talk to new people)

Me: Because men don’t like fat chicks here.  It’s not Alaska where fat chicks are the only chicks. *

Me: But there are actually women here.  There weren’t women in Alaska.

Alex: This is true, but I bet if you went on Craigslist casual encounters, it would be all “Seeking BBW’s” and you’d have them lining up.

So, as any normal person would do, I decide to check out the casual encounters page, thinking “Oh he has to be so wrong.” 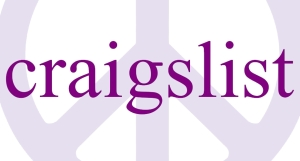 Where dreams are turned into horror stories

Dude… I hate when he’s wrong about stuff like this.

I was actually kind of pissed.  After going through over 40 ads and several inappropriate pictures, All but a few of them were “NO FAT CHICKS!”

Excuse me, I’m not fat, I’m just swollen from this GOD FORSAKEN HEAT!

Now if you don’t mind, I’m going to go and gorge myself on cheesecake.

*Note: There are actually several insanely hot girls in Alaska.  Most of which are married or taken, all of which have a gun that they shoot very well.  I’ve never met an Alaskan girl who didn’t have a gun, seriously. And the Men to women ratio in Alaska was around 6:1, it was awesome.

4 thoughts on “NO FAT CHICKS! (On Craigslist anyway…)”

"I go to the free weights and attempt to build muscle." (Rolls a 1)

Tales of a surviver of abuse and poverty.

Stop Me If I Told You This...
Something to be Determined

...More Than Sweet Potatoes
Transplanted To The South

Culture Shock for a Minnesotan in Louisiana

Personal blog of a person.

I’m not a proper princess

I'm just a hack who likes to eat.

Observations from the trenches....